Spokesman rebuts slander over COVID-19 response, aid to others 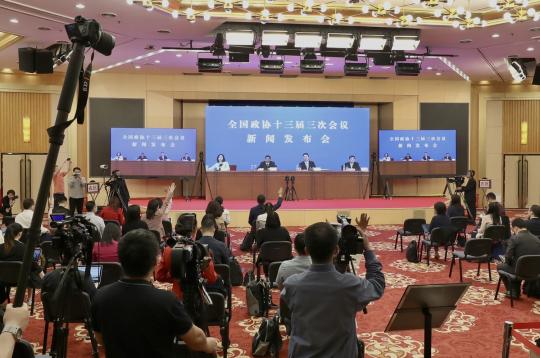 A news conference of the third session of the 13th National Committee of the Chinese People's Political Consultative Conference is held in Beijing on Wednesday, one day before the session's opening. It was the first time a news conference was held via video link at the two sessions, in this case as part of anti-pandemic efforts. (ZOU HONG/CHINA DAILY)

China dismissed accusations on Wednesday from some foreign politicians who smeared and slandered its efforts to fight COVID-19, saying such attempts will fail.

Guo Weimin, spokesman for the third session of the 13th National Committee of the Chinese People's Political Consultative Conference, made the comment at a livestreamed news conference in Beijing.

Those politicians have been politicizing the pandemic, hyping claims that the novel coronavirus comes from China and the city of Wuhan or accusing China of trying to step up its geopolitical clout by helping other countries fight the pandemic, Guo said.

The Chinese government has rebutted such accusations, Guo said, adding that authoritative experts and international organizations, such as the World Health Organization, have also voiced their disagreement. China has lent assistance to other countries with sincerity, Guo emphasized.

China cherishes the support it received from many countries when it was at the height of the outbreak and is supporting other countries hit by the pandemic to the best of its ability, such as by providing materials, sharing disease control experience and dispatching medical teams, Guo said.

Guo said China's efforts reflect its sense of responsibility as a major country and that "it makes no sense and is very narrow-minded to accuse China of propagandizing or trying to take global leadership".

Regarding the quality of China's medical supply exports, Guo said the Chinese government has "zero tolerance" for defective products, and the government departments have adopted strict measures to ensure quality exports. Doubts over quality had many causes, such as different quality standards in China and other countries and incorrect use of the products, he said, adding that China has exported a large amount of medical supplies, of which only "a tiny minority" had defects.

Guo also dismissed the accusation that China covered up outbreak information, leading to the pandemic spreading in other countries, saying China has briefed the international community in an open, transparent and responsible manner.

China took the initiative to inform the WHO and other countries and regions of the outbreak as early as Jan 3, and shared the virus' full genome sequencing with the international community on Jan 12, soon after it was isolated, he said.

Since suspending departures from Wuhan on Jan 23, China has been sharing COVID-19 information daily in various ways, including news conferences, to help in the pandemic fight, he said.