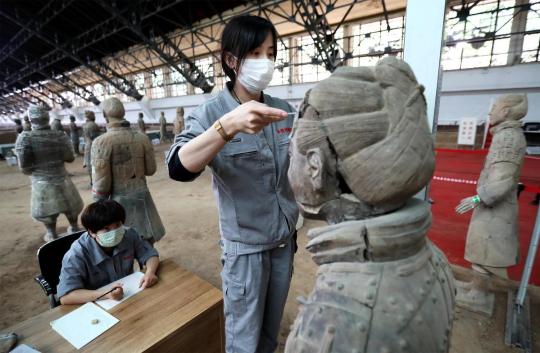 Almost every visitor to the Emperor Qinshihuang's Mausoleum Site Museum in Xi'an, Shaanxi province, will be amazed by the lifelike appearance of the Terracotta Warriors, but very few of them know that a team of "doctors" works backstage to keep these precious historical relics from more than 2,000 years ago in such good condition.

There are about 20 experts and 50 technicians in the restoration team at the museum. Most are graduates of historical relics conservation studies, while some have educational backgrounds in chemistry, history, biology and environmental science.

Lan Desheng, a restoration expert at the museum, is among them. Having worked at the museum for 23 years, he and his team have successfully restored more than 150 Terracotta Warriors.

"We are 'medical specialists' for the Terracotta Warriors and are responsible for 'curing people' from more than 2,000 years ago," he said.

According to Lan, because of the slow deterioration during their burial, most of the Terracotta Warriors were in a state of decay and were in around 60 to 300 pieces when they were unearthed.

"Different from other historical relics, the Terracotta Warriors have a lot more broken pieces, making the job of restoration experts and technicians extremely challenging," he said, adding that it takes around three to six months to restore a single one.

The most time-consuming project he has been engaged in was the restoration of a general, which took his team more than two years.

To make their job more efficient, these "doctors" have established a fixed set of procedures for their restorations. They first conduct an all-around "physical examination" of the item, including researching its size and the shape of the broken pieces, as well as taking photos and noting its current situation.

They then carry out a complete cleaning before finally starting one of the most difficult procedures of the restoration－putting the broken pieces together.

"Usually, we have to analyze the size and color of the pieces to judge which parts of the Terracotta Warriors they come from. We also have to try the 'jigsaw puzzles' many times before putting them together correctly," Lan said.

Liu Jiangwei, a senior restorer who has worked at the museum for almost 30 years, said some of the Terracotta Warriors were so severely damaged that he and his colleagues would suspend the project for a while until more pieces were discovered.

"As restorers, the way that we treat these fragile historical relics is like doctors treating critically ill people," Liu said. "We should be very careful about the restoration－otherwise it will be a great loss to cultural heritage."

Listed as a UNESCO World Heritage Site in 1987, the museum displays terracotta figures from the Qin Dynasty (221-206 BC). These figures represent the garrison force that protects the mausoleum of Qinshihuang, China's first emperor. So far, 180 burial pits and 120 burial tombs have been discovered.