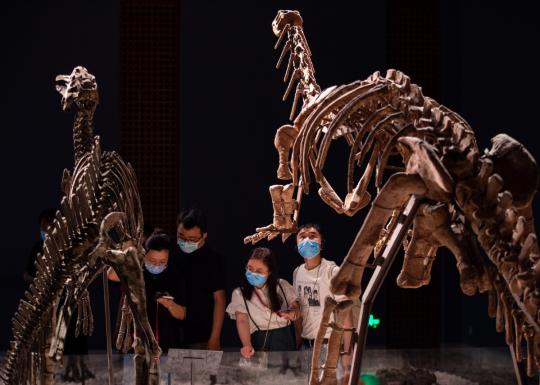 Visitors look at dinosaur fossils on Sunday at Nanjing Museum in Jiangsu province. The museum was the main venue for China's events to mark International Museum Day on Monday. (SU YANG/FOR CHINA DAILY)

China marked the 44th International Museum Day on Monday with offline and online activities, including the donation of items at the Nanjing Museum related to the COVID-19 outbreak by medical workers from Jiangsu province.

The museum in the capital of Jiangsu, one of the biggest provincial museums in China, was this year's major venue in the country to mark the day.

Over 2,800 medical workers from Jiangsu took part in the battle against COVID-19 in Wuhan, the city hit hardest by the pandemic in China. And the donated items included protective gowns with the medical workers' signatures and gifts given by Wuhan residents to show their gratitude.

"These donated items reflect many touching moments," said Gong Liang, director of the Nanjing Museum. "That's the way to pay homage to those who worked hard and made sacrifices during the battle against the virus."

In March, the National Cultural Heritage Administration called on the country's museums to collect items related to the COVID-19 outbreak.

At one point, this year's International Museum Day events in China were planned to be entirely online. However, the containment of the virus enabled the original plan to be largely restored.

International Museum Day was launched in 1977 by the International Council of Museums, or ICOM.Since 2009, China has annually chosen a host venue as the center of its nationwide activities highlighting the role of museums in modern life.

"Today, following the successful crisis management in the whole of the country, it is observed that the Chinese museums are gradually reopening their doors," ICOM President Suay Aksoy said in her message of greetings to the event in Nanjing. "We applaud the actions taken (in China) during these extraordinary days of the coronavirus emergency."

This year's theme for International Museum Day is "Museums for Equality: Diversity and Inclusion".

In her message, Aksoy said museums are "about our common memory and the diversity that unites us in our differences".

"We must keep moving forward while nurturing this spirit of solidarity, resilience and innovation we have found," she said.

An exhibition of 300 relics from nine museums nationwide opened at the Nanjing Museum on Monday to reflect how inclusive and diverse cultures were formed in China mixing different cultural elements from the Spring and Autumn Period (770-476 BC) to the Han Dynasty (206 BC to AD 220).

According to a National Cultural Heritage Administration release on Monday, the Chinese mainland had 5,535 museums by the end of 2019, an increase of 181 compared with 2018. About 28,600 exhibitions were organized at those venues, attracting over 12.2 billion visits last year.

Liu Yuzhu, director of the administration, said a new museum was opened on average every two days in China since 2016.

The pandemic has led people to appreciate the collections in the nation's museums in different ways, thanks to development of technology. For example, during the Spring Festival season, over 2,000 online exhibitions were launched by museums nationwide, attracting 5 billion views, according to the administration.

In addition, an online symposium was held at the Nanjing Museum to mark International Museum Day. Scholars from the United Kingdom, South Korea and the United States took part in the online event, in which they discussed the development of the world's museums in the context of cultural diversity.

"A museum can be a key platform to promote mutual learning among different civilizations, and thus improve understanding and cooperation in today's international community," Guan Qiang, deputy director of the National Cultural Heritage Administration, said at the symposium.